What You Always Wanted to Know About AI But Were Afraid To Ask COALAnet , Vol 4. 2019 Summer edition

In the Series “What You Always Wanted to Know About, But Were Afraid To Ask”, the theme of Part 1 was regarding AI itself and what exactly AI is capable of. COALAnet , Vol 4. 2019 Summer edition

Why is AI such a hot topic as of late?

In actuality, AI has been in the spotlight for a while. What we are witnessing today is the third wave of popularity of AI. How this is different from the first two is 1) the drastic improvement in computers processing abilities and 2) the ability to replicate processes that occur in the human brain.
There is a technological advancement called “deep learning”, where a machine is constantly learning based on different features extracted from data. Raw data that up to now only humans have been able to process through sight and sound, technology/AI can now process by itself.
Further, improvements in related functionality have also had a major impact. Items used to capture data such as cameras and microphones have improved. IT infrastructure now exists that allows for the processing of mega amounts of data. There have been major improvements in the ability to exchange large amounts of data almost instantaneously. Advancements in battery power and reliability have made devices more reliable and stable. All of these things have contributed to the technological advancement of AI.

――How and where is AI used?

In very advanced areas, AI image recognition technology is being used in driverless cars. Using cameras mounted on the car, AI can identify the color of traffic signal or the presence of obstacles on the road. Using that information, the car can automatically decide on what course of action is required, and control the car accordingly.

Another example is with image diagnosis in the medical field. By using AI image recognition technology, image diagnosis is constantly being improved in order to better recognize diseases like cancer, or physical ailments such as bone fractures, thus effectively reducing the amount of work for doctors and nurses.

Another area most people are familiar with is on sites like YouTube and Amazon, where you often see “Recommended for you” items and videos displayed on the page you are viewing. Based on the large amounts of user data collected, AI can analyze and recognize patterns related to content and items that the end user may be interested, and display additional items that the user may also be interested in.

AI functionality is also used in hotel price setting. In order to maximize profits, hotel room prices are automatically set based on the season, seasonal fluctuation in demand, competitor hotel prices, and occupancy rate of the hotel. Further, AI is used to detect unauthorized use of credit cards as well as to facilitate call center operations.

――To what degree are companies using AI?

According to a recent survey regarding AI, only about 10% of companies said they have introduced AI into their companies. However, 80% of companies responded that they are “interested” or “plan to implement” some form of AI. Given that there is more interest in AI, there could be a rapid increase of implementation in the future.

――Is there an example of AI implementation in the manufacturing industry?

Kewpie has introduced AI into their production line in order to sort out defective/unnecessary materials. For example, they use image recognition technology to separate raw potatoes used for production from other objects that could have gotten mixed in with the batch. The company has seen positive results in efficiency and sophistication compared to conventional visual inspection.

――Can Small/Medium Sized Businesses use AI?/h4>

Absolutely. We have only cited examples with larger companies here, but small and mid-sized companies can also use AI in the same way. In fact, smaller companies who have a lack of staff should definitely consider implementing AI. There are many companies are unable to continue the succession of technology due to the lack of staff. By implementing AI into even a portion of the business, the technology becomes a standardized part of the business and can continue to run irrespective of staffing.

――What is important when introducing AI into a company?

First off, it is important to identify and clarify the purpose of introducing AI. Examples of purpose could be “Identifying regular versus defective products” or “Improve operational efficiency.”

From there, it is necessary to identify the information and tacit knowledge that will act as the base knowledge from which to build the AI for development and implementation. In this, a company can use ready-made basic core technologies such as cameras and sensors. However, when it comes to actually building the application, this should be designed and developed by the company itself. While this is an area in which our company can be of assistance, we do recommend you also consult with a specialist in this field.

Also, as shown in the following table, there are various subsidies a company can obtain to assist with the implementation of AI. For those companies with an interest in implementing AI, this may be something you also want to consider. 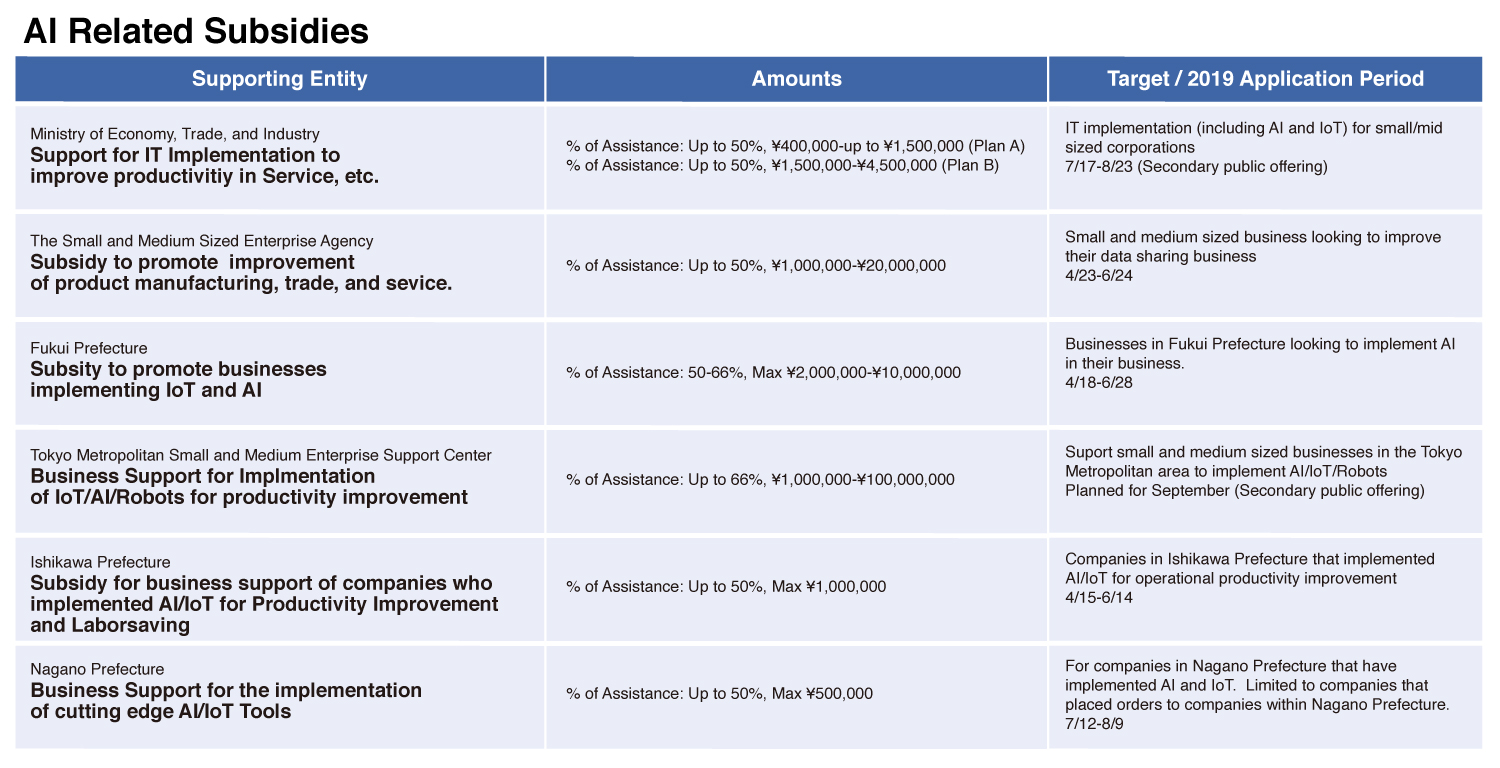 What You Always Wanted to Know About Subscription ...